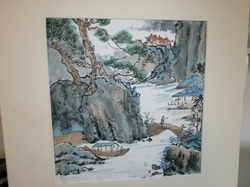 Here we intend to up date everybody with the details of what we are going to do in the future as well as what we have done. So far we have just had the AGM in May as we plan to do each year. No changes to the committee as they are all in place still as voted on last year.
We have recently had the exhibition at Radcliffe on Trent where we had the show for three days during April. Teresita had her work in as did Alan, Pat , Janice and dot and my goodself. The next show in the pipe line is the show at Patchings farm and then the show in September again at Radcliffe on Trent. This will be followed by the Bramley Apple show at Southwell in October.
We have the new event in August when we want people to paint Plein air in and around Southwell to do with the Bramley apple story. So buildings trees and anything else to do with the Bramley apple story. These pictures will be held over ready for the Bramley apple festival proper in October. The event in March which we have already done was the Marie Curie Daffodil Painting competition. We sponsored this event this time as our sponser pulled out at the last minute. So in future we will get all entrants to make cheques payable to CBPS midland group so that we can write out our donation to marie Curie cancer care.